Pork neck, pork belly, trotters, pancetta and chorizo are slow-cooked for a rich, hearty stew. This Paleo version of Brazilian Feijoada does not have beans. 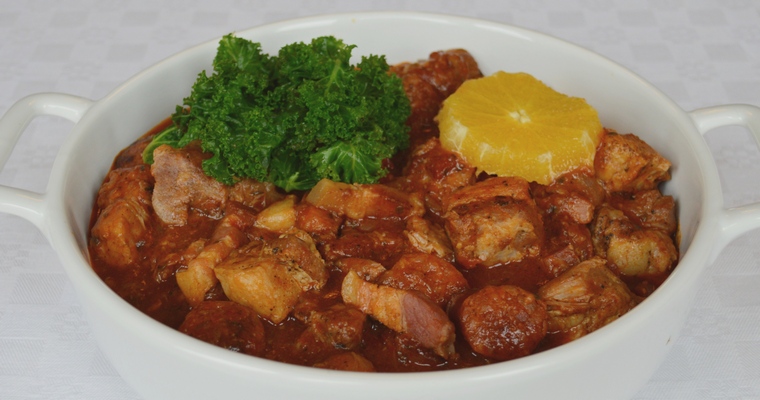 Authentic Feijoada (fey-jwah-duh) is a rich and hearty pork and bean stew, for which minimal seasoning is required. Although it is considered the national dish of Brazil, it actually originated in Portugal, being transported to Brazil when it was a colony of the Portuguese empire. It is made from an assortment of cuts, with the exact mixture varying from cook to cook. Generally there will be a good mix of fresh meat like ribs, shoulder and belly, cured meat like sausages and bacon, and cheap trimmings like ears, feet and tail. The trimmings are fished out before serving, as they contain very little edible meat, being comprised largely of gristle. Instead, their role is to enrich and thicken the cooking liquid. As they cook down, the connective tissue gets broken down into gelatine and released into the cooking liquid. When cooled, this enriched stock will set like jelly.

A pound of dried black beans which have been soaked overnight is normally cooked up with the meat. This gives the stew an inviting dark purple-brown colour, and also results in a thriftier dish. Some regions use red beans like pinto beans or kidney beans, while other regions use white beans. As beans are complex carbohydrates that are difficult to digest, this recipe does not include beans. If you want to vary the texture and eke out the meat content, you can dice some starchy vegetables like carrots or sweet potato, and add these to the pot for the final 30 minutes or so of cooking. Personally, I think this is unnecessary. I am not a fan of mixing vegetables into slow-cooked stews, as they are generally overpowered by the meat, and rendered into tasteless and unidentifiable lumps.

On one point everyone agrees, and that is on is the necessity of serving Feijoada with a side of collard greens and orange slices. These provide refreshing interludes throughout the meal, cutting through the fatty and salty meat. The idea is to eat a couple of forkfuls of the stew, then take a break with a forkful of bitter green or sweet and sour orange.