An irresistible combination of lamb meatballs and curry, cooked in a creamy sauce. This Dairy-free, Gluten-free and Paleo recipe does not use breadcrumbs. 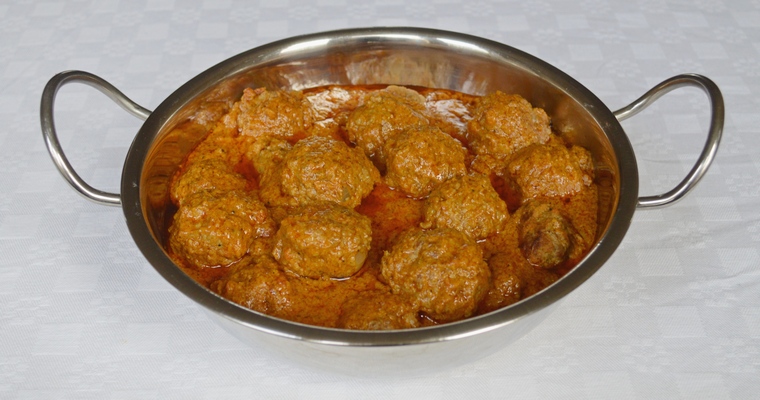 Korma is a mildly-spiced curry, in which chopped vegetables or meats are braised in a sauce thickened by yoghurt or cream. It is an aromatic and warming dish, rather than a hot and piquant one. Lamb works particularly well with aromatic spices, which is why Middle Eastern and Indian cooking commonly pair it with cardamom, ginger, cinnamon and star anise. 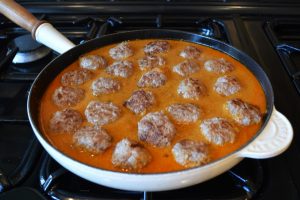 Meatballs are found in various forms across Europe, Scandinavia, the Middle East and into Asia. They are made by mixing ground meat with herbs and seasoning, then shaping into balls and cooking. The cooking method for meatballs differs according to whether the meatballs are served dry or dressed in a sauce. Meatballs that are served dry and undressed, such as Lebanese Lamb Kofta Skewers, are cooked using a direct heat method, such as a grill, frying pan or baking in the oven. Meatballs that are served in a sauce, such as Italian Meatballs, are usually cooked in the same pan as the sauce. This is mutually beneficial to both parts of the dish, as the meatballs are tender and juicy thanks to the gentle poaching method of cooking, while the flavour of the sauce is enhanced by the meat juices. In order to achieve a tasty caramelised crust, the meatballs should be quickly browned in a frying pan before being poached.

My recipe involves making a curry paste, adding liquid, and then poaching lamb meatballs in this sauce. Ground lamb has a high fat content, which will render out during cooking. If too much fat is lost, the finished meatballs will become dry and crumbly, and the cooking sauce will be unpleasantly greasy. You can prevent this by working the raw mixture for a few minutes when you make the meatballs, using your hands to knead the mixture. This creates an emulsion by suspending the fat particles in the meat proteins. When the fat particles are surrounded by protein they will hold together, and the fat will remain inside the meatball.