Delicious parcels of ground pork and seasoning, wrapped in fat for maximum flavour and moisture. This Gluten-free and Paleo recipe does not use breadcrumbs. 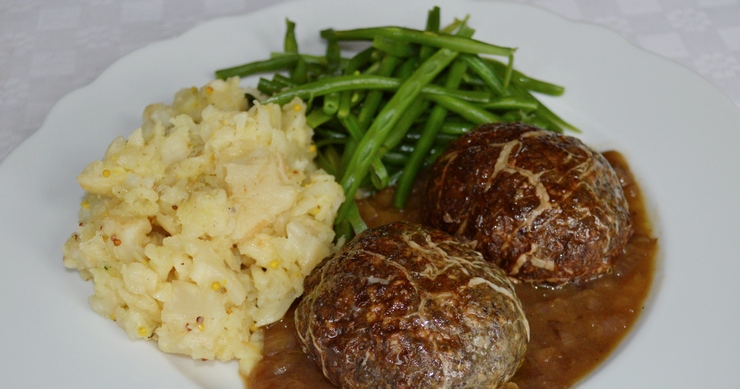 Faggots are a traditional British offal dish that are a sort of halfway house between a meatball and a meatloaf. Like meatballs, they are made by mixing ground meat with herbs and seasoning, then shaping into balls. Like meatloaf, they are baked in the oven rather than gently poached in a sauce. The application of direct  heat means that there is a danger that the meat will dry out during cooking, resulting in a tough and crumbly texture. To guard against this, faggots have an inner and an outer line of defence.

Inside the faggot, breadcrumbs are mixed in with the meat to absorb the juices released during cooking. Gluten-free options can be made by substituting with oats or cooked rice. A grain-free option can be made by using mushrooms that have been finely chopped to a breadcrumb-like consistency. Mushrooms are like mini sponges, and are excellent at soaking up and retaining liquid (which is why you should never wash mushrooms before cooking, as this will saturate them with water, meaning that they take a long time to release their juices and brown).

Outside the faggot, the meat is wrapped in a layer of pig fat. This is called ‘barding’, and constantly bastes the faggot as the fat renders out during cooking. It also holds the wet mixture together, rather like a sausage casing. Traditional recipes use pig caul fat, which is the transparent membrane of fat that surrounds the stomach. This lacy fretwork of white veins is a beautiful thing to behold, although it can be maddeningly fragile to work with, so it’s always worth getting a bit more than you need. You should be able to order some from a good butcher, but if you are having difficulty then just substitute with streaky bacon.