A classic starter. Ham hocks are cooked slowly until the meat falls off the bone, then packed it into a tin with some of the enriched cooking liquid to set. 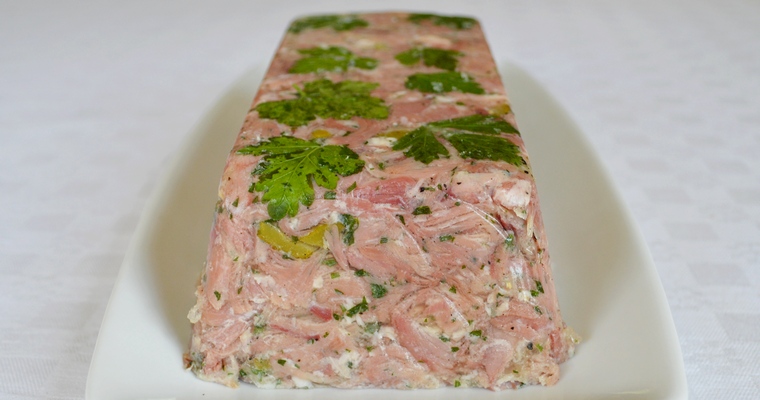 Pork hock is the cut of meat taken from the lower leg of the animal, around the ankle region. Somewhat confusingly, it is also known as the knuckle. Because it is from a weight-bearing part of the animal, it is a lean cut full of tendons and ligaments that requires long, slow cooking to render it tender enough to fall off the bone. Hock is usually sold salt cured and smoked, in which case it is referred to as ham or gammon hock, and is essentially a jointed version of bacon.

If you search, you can certainly find recipes where ham hock is treated like a traditional joint and roasted in the oven beneath an inviting layer of crackling skin. Typically for a nation so in tune with the gastronomic power of pork, this is a common dish in Germany, where it is served with mountains of fried potato and white cabbage. However, as ham hocks carry a strong flavour and contain lots of skin and bone, the meat is more often used for seasoning purposes rather than being served whole. Traditionally it is paired with peas or beans, such as in the classic split pea and ham soup. There, the hock is cooked in a braising liquid until tender. The meat is then stripped from the bone and flaked before being returned to the cooking liquid with the remaining soup ingredients. Which reminds me: when cooking ham hocks, never throw away the cooking liquid, as it makes the most marvellous-tasting stock. So for such a cheap cut of meat, it is incredibly giving and versatile, finding a home in omelettes, salads, stews and stir fries.

As the hock cooks down, the tough connective tissue that holds the meat to the bone gets broken down into gelatine and released into the cooking liquid. When cooled, this enriched stock will set into a jelly, which can be used to bind together the flaked meat into a terrine. To boost the gelatine content of the stock, I suggest cooking the hock with a pig trotter that has been cut up or bashed about with a meat cleaver by your butcher. The terrine can be prepared well ahead of serving, so makes a perfect dinner party starter. Additionally, it will keep well in refrigerator, for at least a week, as the gelatine acts as a preservative (this is why the Victorians were so wild about aspic dishes like calves foot jelly).