Classic and versatile vinaigrette made with olive oil, vinegar, Dijon mustard and honey. Creates a deliciously thick coating to pour over salad vegetables. 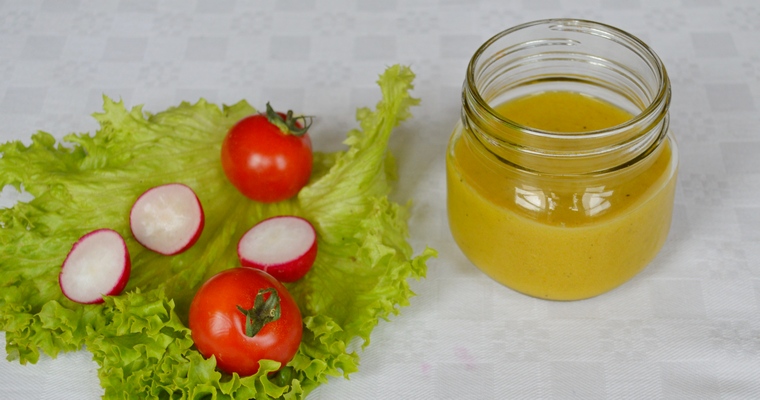 A vinaigrette is a salad dressing that is made by mixing oil and vinegar to create an emulsion. An emulsion is a mixture of two liquids that should not normally stay combined. For example, oil does not dissolve in water, and will float to the top. As vinegar is mostly comprised of water, it separates into a distinct layer when mixed with oil. You can temporarily combine oil and water by shaking them together – this breaks down the molecules, dispersing and suspending tiny droplets of oil in the water. However, this only creates a temporary emulsion, as the oil and water particles will be more attracted to themselves than to each other. Left to stand, the water and oil particles will re-form and separate. You can see this principle in action if you store salad dressings in the refrigerator (emulsions are particularly sensitive to changes in temperature).

Emulsions can be made stable by adding emulsifiers like egg yolk, mustard or xanthum gum. Emulsifiers contain proteins that coat the oil particles and so stop them from binding together again. They achieve this because the protein molecules have opposing ends; one end that attracts water, and one end that repels water. When the proteins coat the oil particle, the water-loving end faces outward, toward the water, preventing the oil particle from linking to other oil particles. Honey is not an emulsifier, but it helps to stabilise emulsions and create a thicker consistency. It also adds a small amount of sweetness, which rounds off the bitter flavours from the extra virgin olive oil and the sourness from the vinegar.

Some French dressing recipes include a clove of minced garlic. I find this too strong for raw assemblies, but excellent for livening up steamed greens like broccoli and green beans. I tend to triple the amounts given in the recipe below, and make a big batch of salad dressing to last me the week.