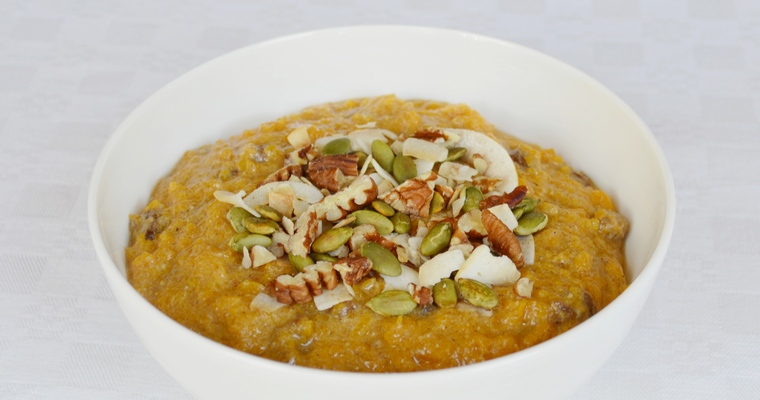 Porridge is usually understood to mean a grain-based dish in which oats, rice, barley, maize, rye or wheat are cooked in a pot with milk or water until they break down to form a creamy but textured mush. This breakfast dish evolved from a mainstay of the medieval diet called ‘pottage’. Before the advent of closed cooking ranges, meals were cooked in a pot suspended over an open fire. This was the true age of one-pot cooking. Liquid or semi-liquid dishes like soups and stews could be left unattended for large stretches of time while they cooked, as there was no danger of the bottom scorching. Indeed, a pot of pottage would be kept on the go for several days, constantly being topped up with more cereal, vegetables, meat or fish. So although the modern definition of porridge is restricted to a grain stew, the notion of vegetable porridge is not novel.

Butternut Squash (or pumpkin if you have the stamina to peel one!) makes an ideal porridge, as it is naturally sweet, and has a high-starch content. This means that is has a firm texture capable of retaining some bite – unlike watery vegetables like courgettes. But, unlike grains, vegetables do not contain enough starch to gelatinise the cooking liquid and create a thick consistency. For this reason, you need to add a thickening agent to pumpkin porridge. I used ground flax seeds, but, if you don’t have any in your cupboard, there are many alternatives that work just as well. Here is a list of alternative thickeners and toppings: