Delicious breakfast hash made by mixing Gluten-free sausage meat with vegetables and frying in a heavy pan. This Paleo recipe does not contain potatoes. 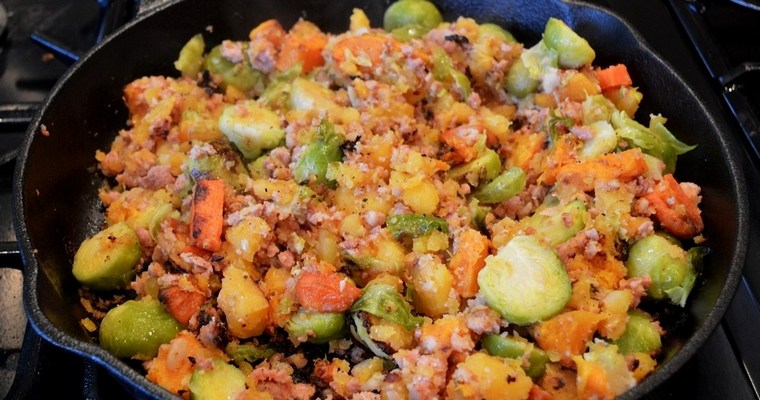 A ‘normal’ person’s breakfast routine allows the luxury of mindlessly upending a box of cereal into a bowl, while bumbling around the kitchen wiping the sleep out of their eyes. While we don’t actually have to go out into the wild to catch our breakfast, for us Paleo Pioneers it can sometimes feel a bit, well, unjust that we have to rustle up a whole meal as soon as we wake up.

So I’m all for making breakfasts as easy as possible. Anything that can be made in bulk the day before and assembled with minimum supervision is good. Hash is a great Paleo breakfast because, not only does it tick these boxes, but it’s also a great way of using up leftover vegetables from the night before. It positively thrives on neglect because, while you leave it frying in the pan to multitask on procuring a cup of coffee etc., a beautiful crust will form on the bottom of the hash – which rather fortuitously is just what you want in a truly great hash!

You can also add baked eggs to the dish by making wells in the hash mix and cracking in eggs. If cooking in the oven, add the eggs for the final 10 minutes.