Pulled Pork, Crackling and Barbecue Sauce (made with honey) 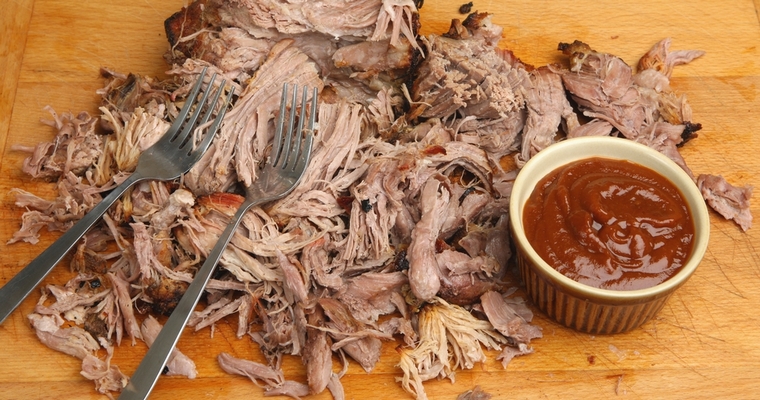 Pulled pork is pork that has been cooked for a long time over a low heat, until it has become so tender that it can be pulled easily off the bone. It is done using a cheap, tough cut of meat that is able to withstand prolonged cooking without drying out and shrinking. Once the pork is cooked, it is shredded into strips using two forks. Typically it is served in a smoky or spicy barbecue sauce, with a vegetable slaw and fries.

Pork crackling, meanwhile, is just the name given to the skin and the underlying layer of fat when it has been roasted to a high level of crispiness. It is usually served with the meat as an ‘optional’ treat, which is in fact impossible to resist.

When slow cooking meat, it is important that you use a cut that is suited to this method of cooking. For example, cuts taken from the neck, shoulder, rump and leg are from parts of the animal that are weight-bearing and well-exercised. Hard-worked muscles contain lots of collagen – that is, a connective tissue that acts like scaffolding and holds the muscle to the bone. As collagen is very tough, it needs to be cooked for a long time, in a moist heat, before it starts to break down. Once this happens it gets converted into rich liquid called gelatin, which delivers succulence to the meat. As collagen runs right through the meat, the liquefied gelatin acts as an internal baste, resulting in silky slabs of meat that slough off the bone.

If you undercook a hard-worked and high-collagen cut, you will end up with tough, chewy meat that is difficult to digest. In contrast, cuts taken from low-worked, low-collagen parts of the animal, such as the loin, do not need to be cooked for long before they are rendered tender and tasty. In fact, tender cuts cannot withstand prolonged cooking. Muscle fibres contract when they are cooked, becoming progressively tougher, drier and shrivelled.

03. Do I need to prepare the meat with a marinade?

Lots of recipes will recommend marinading the meat overnight – that is, soaking the meat in a bath of oil, acid and spices. This is not an option if you want to make crackling. Water is the enemy of crispiness, so soaking the meat in a liquid will result in a soggy top-layer of skin and fat that is fit for nothing, and a crime against prime pig fat. It will also stop the meat from browning and developing a crust, which is caused by meat sugars caramelising in a dry heat.

My other reservation is that pork shoulder is a big old hunk of meat, and I do not believe that the flavours are capable of penetrating all the way into the meat. Marinades work fine on thin cuts of meat such as skirt steak, but they are totally ineffective when used on thick joints.

04. What about using dry rubs?

Dry rubs are spice mixes that are rubbed all over the meat immediately before cooking. Again, as with marinades, experience has taught me that the flavours simply do not penetrate the meat. You can pound away with a pestle and mortar making the most exotically fragrant pastes and rubs, but this all comes to naught when you take the first bite and realise that, beyond a very thin outer crust, you cannot detect any of this magical mix, and have just wasted several teaspoons’ worth of quality spices.

The other thing that gets wasted with this method is all the quality meat juices and fat that render out into the roasting tray during cooking. The juices are an excellent base for gravies and sauces, and the fat can be poured into a jam jar and then stored in the refrigerator for use as a cooking fat (this is essentially lard). But if you use a dry rub, the meat juices and fat soak up harsh flavours, and so cannot be used again.

05. Do I need to prepare the meat before cooking? 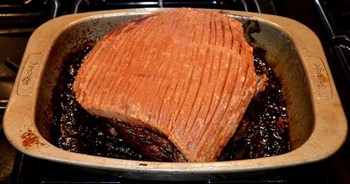 If you want guaranteed crispy crackling, then the answer is yes.

The first thing you need to do is score thin, parallel lines into the skin. Use the point of a small, sharp knife to cut about half-way through the thick layer of fat underneath. Better yet, ask your butcher to do this for you when you buy the meat. Scoring allows the fat to escape during cooking, which then bastes the skin. This is why you don’t need to brush any oil over the skin before roasting.

The other necessary condition is dryness, and this is where pre-salting comes in. This is sometimes referred to as dry-brining, but all it involves is rubbing salt over the skin the night before, which is then brushed off before cooking. Salt naturally draws out moisture, which is the enemy of crispiness.

So we have established that marinades and rubs are not reliable ways of getting flavour into the meat. As with all oven-roasted joints, I would recommend applying flavour to the meat after it is cooked, by making a complementary sauce. By cooking the sauce separately, you can taste and test the flavours as you go along, until you have the perfect blend. The downside is that the sauce will not be flavoured by the meat juices. However, this is easily remedied if you deglaze the roasting tray once the meat is cooked and is resting. First, pour out the fat from the roasting tray into a jam jar, and set aside for future use. Tip the sauce into the tray, put over a medium heat on the hob, and then use a spatula to scrape off all the browned bits stuck to the bottom.

07. What temperature do I cook the meat at?

Like any roasted meat, if you want the real depth of flavour that you get from a browned crust, you need to blast it for the first 30 minutes at 220°C/425°F to caramelise the meat sugars. However, it’s important that you turn the oven down to a much lower setting after the first 30 minutes or you will damage the meat. For perfect pulled pork, long and slow is the way to go. How low you go will depend on the cooking method you use.

If you have a slow cooker, you can use it to cook pulled pork for 8 – 10 hours. And if you live somewhere blessed with a temperate climate, then you can cook over an outdoor barbecue for 9 – 12 hours. But let’s simplify things by assuming that we are going to be cooking the meat in a conventional oven.

However, even when we focus on a single cooking method, it can still get a bit confusing. Ask 10 different cooks how long you need to cooked pulled pork for and you will likely get 10 different answers; ranging from 8 – 12 hours at 110°C/230°F, to 4 hours at 170°C/340°F. So let’s try and get a more objective answer by looking at the science.

Pork shoulder is cooked to perfection when the internal temperature of the meat hits 95°C/205°F. Collagen gets converted into gelatin when the meat hits 70°C/160°F. This is also the temperature at which the meat starts to ‘stall’. This is when the moisture in the meat rises to the surface and starts evaporating. This has a cooling effect on the meat, stalling the cooking process by preventing the internal temperature of the meat from rising further toward the magic 95°C/205°F – think of it like the sweat on a long-distance runner. The meat can stay suspended in this state for several hours, resulting in cooking times of upwards of 8 hours. The good news is that you can bypass the stall by covering the meat with a double layer of tin foil. This prevents evaporation, and so quickens the cooking time.

So my tried and tested method is an initial blast of 30 minutes at 220°C/425°F, uncovered, followed by 5 hours at 150°C/300°F, covered by a double layer of tin foil. But at the end of the day, pulled pork is done when it’s done – that is to say, when it has been rendered so tender that it falls off the bone.

Make sure to use a roasting tray that is a snug fit for the pork shoulder, with a couple of centimetres room around the edges. As this is a very fatty joint, expect a lot of fat to be rendered out during the cooking process. In a correctly-sized tray, this will help keep the pork moist and succulent.

for the pulled pork:

for the barbecue sauce: